Details → How It Works

AKRR executes application kernels on HPC resources using the same mechanism as a regular user. For example it uses ssh to access the system and submits job scripts through the system scheduler. This allows for not only monitoring the performance of the application kernels themselves but also testing the whole workflow that regular users employ in order to carry out their work.

AKRR was designed to execute a large number of jobs on a number of HPC resources in 24/7 mode. To achieve high reliability, a multi-process design was chosen where the master process dispatches a small self-contained subtask to the children processes. This allows the master process code to be relatively simple and moves the more complicated code to the children processes. This way a severe error on one of the child processes does not cause the whole system to collapse.

Although application kernels are computationally lightweight and their pure execution time lies between minutes to half an hour, the total time from job script creation to loading the results to the database can easily takes several days, due to potentially long queue wait times. In order to manage a large number of jobs and to be able to recover from critical failures, the entire application kernel execution task is split into small self-contained subtasks (see Table 1 for the subtasks). Each subtask is executed by a child process and should take only a few seconds. At the end of each subtask, the current job state is dumped to the file system. This allows us to recover to the last known state of AKRR in the case of a critical failure. 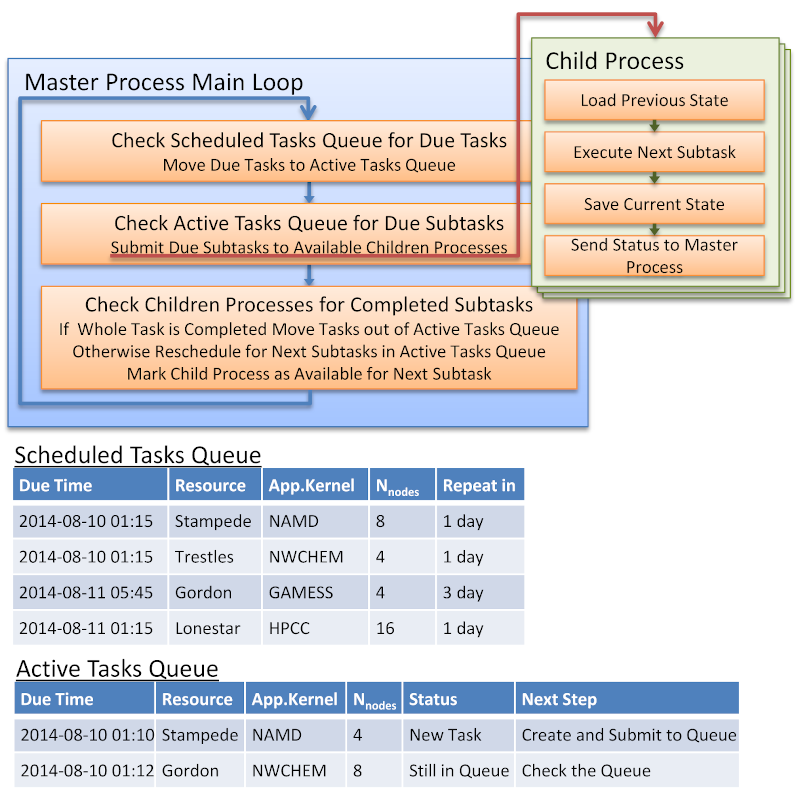